25 April 2010, Sunday
We spent part of the morning walking around the High street of Inverness. We then travelled back in the direction of Fort William and visited Castle Urquhart, Loch Ness, Scotland (pronounced “urk’at”). It is a ruin and has some history. 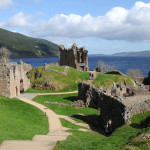 As a romantic ruin, Urquhart Castle must be the envy of romantic ruins the world over. It’s not just that its intriguing shape reflects the irregular outcrop of rock on which it was built. And it’s not just that for the last millennium or more this site has been the key that unlocks the major route through the Highlands. No, what makes Urquhart Castle the definitive romantic ruin is the possibility that the 600 foot deep waters surrounding it on three sides may suddenly ripple, then part, as something completely unknown to science emerges to confound a sceptical world. Nessie may or may not exist. But the possibility that she does provides a powerful draw to the visitors who flock to the area year after year. And although Loch Ness has roads on both sides, access to the loch is relatively limited, and the views from the A82 are often restricted by trees, especially in Summer. It is therefore no surprise that the coincidence at Urquhart Castle of good access to the loch, good views across and along it, and a stunning set of ruins, should be so popular. My pictures convey the current state of the castle.

2002 saw the opening of a new visitor centre. This is built into the hillside beside and below the main road and offers much better car and coach parking as well as a spacious shop, cafe, audio-visual displays and a superb model showing the castle in earlier, less ruinous days. You can see the visitor’s centre at the top of the picture.

Opinions differ as to whether Urquhart Castle was originally the site of a Pictish fort dating back to a visit by St Columba in 597, but there was certainly a Pictish settlement in the area at the time. The first real evidence of anything recognisable as a castle dates back to the years following 1230, when Alexander II crushed a revolt in Moray, to the north, and decided to defend this strategic route. In 1297 the castle was in English hands loyal to Edward I; and survived a night assault by the Scots. To no avail, because by 1303 it was in Scots hands and under siege by the English, to whom it fell. Later it featured among a handful of castles keeping alive Robert the Bruce’s claim to the Scottish Crown. By the 1390s the focus of conflict had switched. Now it was the Scottish Crown trying to defend itself against incursions from the Macdonalds, the Lords of the Isles, from the west. And again Urquhart Castle was pivotal, with ownership moving back and forth between the two sides for a further 150 years. The complex interplay of Scottish history led to further conflict around Urquhart Castle in 1513, and in 1545 it was besieged and subsequently plundered by the western clans. Repairs followed, but the castle fell into decline, playing little part in the Civil War in the 1640s. In 1689 Urquhart Castle saw its last action, when a small garrison supporting the Protestant Monarchy of William and Mary held off a much larger Jacobite force.

The garrison later left, blowing up much of the castle as they did so; and signs of this can still be seen around the gatehouse. Its main role since has been to serve the local community as a convenient quarry, which explains why so much of the structure has gone. Visitors to Urquhart Castle will find an odd, waisted shape built around two points of focus on separate rocky outcrops. To the southern end, the highest part of the castle is the upper bailey, commanding extensive views. At the other end of the castle lies the tower house, once the five storey hub of the castle capable of being defended even if the rest of the castle fell to whoever wanted ownership at the time. In the middle lies the gatehouse on the landward side, and the water gate on the lochside. More than once during its troubled history the castle held out because it could be resupplied by ship. As a place to visit, Urquhart Castle makes a fascinating half day out. There are many castles in Scotland that are more complete, and some that are larger. But there are few with quite such a turbulent history, and even fewer located in such beautiful surroundings. And in no other do you have the chance, however faint, of taking a photograph that proves that dinosaurs are not, after all, extinct. Go here to the website to read up on this – http://www.aboutscotland.co.uk/ness/urquhart.html A visit to Loch Ness Visitor Centre followed but that was largely disappointing. The video presentation on “Nessie” was boring.