30 April 2010, Friday
Left Wick and travelled in the direction of John O‟Groats at the northern tip of Scotland. John o’ Groats is the traditionally acknowledged extreme northern point of Scotland, in northeastern Caithness.

We made our way down to the ferry services at Gills Bay (nearby) and took a service run by Pentland Ferries over to the Orkney Islands. We took the car (#56 pounds one way including ourselves). Brian Martin thought that it would be quite expensive and was perhaps thinking about one of the other ferry services. It turned out that Pentland Ferries runs a cheaper service with a more modern ferry. I have never travelled on a ferry before and this involved driving the car onto the vehicle deck (left hand side) and positioning (doing a U turn) the car in the opposite direction (right hand side) so you can drive off easily the other way. Trucks and other larger vehicles were required to back onto the ferry. It was amazing how many vehicles could fit into the hold. We went up on the deck for the one hour trip across. It was quite cold and I ended up wearing my beanie under my hood and the gloves I borrowed (they were Leslie‟s – loaned by Pat Smith). Thank goodness for the Gortex jacket. I still felt the cold.

The ferry docks at St Margaret‟s Hope on the island of South Ronaldsay. Drive off the ferry and then travel in the direction of the island of Burray and then again to Kirkwall on the main island.

These three islands are the only ones connected. To get to the rest, you have to use the ferry or fly. The islands are not large and were occupied by troops during WW2. There is a lot of evidence of their presence on the islands. In the main, they created a network of roads and put in the entire infrastructure needed. To see the islands (all of them), you would need to stay for at least 3 weeks.

We are staying in the Orkney hotel for 2 nights. The guy in the photo is still there. He kept apologising for the lack of wi-fi in the rooms and gave me a long story about how many times they have had a go fixing it. He said they even put boosters in the passageways but to no avail. My back is giving trouble. I am finding it quite difficult to walk any great distance. The internet access from the hotel (website – http://www.orkneyhotel.co.uk/index.htm) does not work in the room. My dongle does not work either.

This is the photo of our room which I found on the website. The two single beds were made up as one. I found later that I could get internet access in the lounge of the hotel but it was a hit-and-miss thing. No matter, it met my needs at the time.

We started with the visitor centre and walked a short distance to a tomb called “Maeshowe.” This was built in the Stone Age (a very long time ago – older than Sandra) and the construction is unique in that all the stones are fitted together. It is in a pyramid shape and you start to imagine all sorts of things when you look at how the thing is constructed.

Getting in was through a very low ceiling passage way that made you duck-walk of bent over (painfully in my case) for about 20 yards. I don‟t like being in confined spaces and that just freaked me out. I had to stand around while a very enthusiastic tour guide waxed lyrical about the tomb, the ruins (writing in that century) and so on. Towards the end, I could stand it no longer and went out. You will have to see Sandra‟s pictures (and movies) that she took. 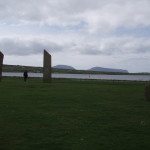 Next it was the Standing Stones of Stenness and they remind you of Stonehenge. What was really interesting is the people who concentrated on building a moat around the standing stones, as they did for the tomb. We spent some time here and were quite taken with the spacing of the stones – seemed very even. They are very large and would have taken some considerable effort to quarry and move them into place.

Sandra took a lot of film and it would be a pity if that was not included in the website. The following relate to the Standing Stones of Stenness. 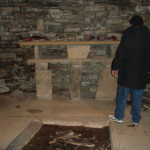 Next was Skara Brae, Neolithic village. Discovered after a storm uncovered sand dunes, this is also a Stone Age village that is underground with living and working areas connected by passageways. 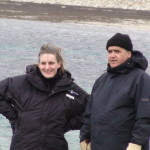 Met a girl working for Historic Scotland who is from Melbourne. She was working as a guide. Let me tell you how cold it was. I was freezing for the first time since arriving in Scotland.It did not take me long to decide that I am not built (well I am tubby) for the cold because I cannot stand it. Instead I opted to walk back to the cafe, order something hot and read my book in the warmth. Sandra soldiered on and braved the elements. All the pictures and movies are hers.

Sandra made a number of videos in relation to Skara Brae, Neolithic Village. Posted below.

In the course of our adventures we visited Unstan, a Neolithic chambered cairn located about 2 miles north-east of Stromness on Mainland, Orkney, Scotland. The tomb was built on a promontory that extends into the Loch of Stenness near the settlement of Howe. After my experience with the tomb called “Maeshowe” I decided that I did not want to duck walk underground and preferred to stay in the open air. Sandra is made of sterner stuff (of William Wallace and others of Scottish courage). In one of the videos you will see me standing at the tomb entrance (not going in).

There was time for some sightseeing in Orkney and we decided to visit the Earle’s Palace in Kirkwall – link – http://www.scotland.com/castles/orkney/earls-palace-kirkwall/. There is a fascinating story about the palace and you should click on the link to read of it. We took pictures, lots of it and tried to image what it would have been like to live there.

Cannot make a short call using Pennytel – it connects – you can talk to the person and then the call disconnects. The broadband in this hotel is weird. We are planning to leave on Sunday on the noon ferry. 2 May 2010, Sunday We are leaving on the Pentland ferry today at 12 noon back to Scotland. Have to be at the ferry terminal before 11.30am. Broadband in the hotel is out. The dongle does not work in the lounge (where the hotel broadband does work). Bugger! Still have the cold (getting better – funny how it spoils everything) and a sore throat. I remarked to some people we met at dinner 2 nights ago that this was the first time I had a cold since I retired in 2005. Stayed overnight at the Weigh Inn Hotel in Thurso and also fuelled the car.