23 April 2010, Friday
After breakfast Sandra and I visited a small island in the lake called “Inchmahome” – http://www.mysteriousbritain.co.uk/scotland/perthshire/featured-sites/inchmahome-priory.html 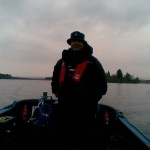 Met Malcolm Hogg who was operated the small boat that took us to the island. Malcolm is from Melbourne and has been living in Europe for some years. He says that although he misses Australia, he is unlikely to go back.

The priory has a very interesting history.

Sandra walked around this area frequently when she worked at the Lake Hotel (she was 18 years old). Mary Queen of Scots was hidden here when her life was in danger from the English. The priory is a ruin and the national trust is just preserving the building as best it can. It is more of a tourist walk, nature, etc type attraction. There is even a shop on the island.