ort William – rained all day – very cold – stayed at the Alexandra Hotel (Sandra’s name is “Alexandria”). Very nice old fashioned accommodation. The Martins stayed there as well. This hotel has a lift but it is very small. Somehow all four of us managed to get into it including the luggage.

The image of the dining room is indicative of the old world charm of this hotel. Appropriate to mention the luggage situation. We took one case (mine). Sandra opted to take several bags. I offered to share my case and when I opened it found that more than 50% was her things. I never ceased to be amazed how much of the available space she needs – at home in Singleton she has 7/8 of the walk in robe (no bull) – pictures supplied if you need proof.

Said goodbye to the Martins the next day (Saturday) who returned to Avonbridge (their home). Walked around the town of Fort William – my feet hurt – seem to be swelling. Changed shoes. Travelled to Inverness in the late morning.

5 May 2010, Wednesday
The weather is not good at the Isle of Skye. I woke up feeling down again and told Sandra that I had seen enough scenery. I think that she is disappointed with me but that is the way it is. You sometimes need to call a halt to what you are seeing and gather yourself and start again.

We are on our way to Fort William.

It looks like we will meet up with Joan and Jeff Cole around the 15th of May in Edinburgh. Also Janice and Ken Harwood towards the end of May in Darlington, in the north of England.

During the drive to Fort William we went to the place where Bonnie Prince Charlie (the Stuart line – website – http://www.rampantscotland.com/famous/blfamcharlie.htm) raised his standard. A monument is built commemorating this event but apart from this, there is very little else to see. Again they offer you the opportunity of climbing (stairs again – groan) to see the views.

Had a meal at the Alexandra Hotel (they serve good food). I had a beer (one pint this time – must be getting better – perhaps they will induct me as an honorary beer drinking ROLO – private joke for the fabulous 6 and LouLou).

We stayed overnight in a bed and breakfast (Beaufort House in Fort William). Very reasonable tariff (60 GBP) with a room overlooking the loch. Very clean and well presented. Ray Smith – if bnb is your preference, stay here. I will send the contact details to you in another email. Your other alternative is the Alexandra Hotel – good rooms and food. No internet at the bnb but my dongle works.

6 May 2010, Thursday
We are travelling back to Avonbridge today – according to Google – 117 miles – should take between 2-3 hours at average speed (less than 60mph). I want to stop over at Falkirk and have the car cleaned.

Some reflections on the shower systems in Scotland. Most have a bath with a high side to step over – not very good for people who are older and less agile (Sandra actually said this – I agree). It is time that the baths are taken out and replaced by showers. Scotland relies on tourism. A good shower (with adequate space to move in) would be ideal including good water pressure.

Other reflections – the habit of charging for your parking when you turn up to tourist locations. It is very off putting as it signals the rip off process that is already in place especially with the charges to see things (see my notes at Culloden) that are interesting but not spectacular.

Other reflections – the roads are not great and are constantly in need or repair. The lanes are not wide and often you have to slow and pull to one side to let the person coming the other way pass safely. What is wrong with wider roads? We do it in WA and we make the room.

Other reflections – when work is being done on roads they don’t use the lollypop men. Instead a system of signals is used that controls everything quite well. There is not a long wait.

Other reflections – 60 mph is fast enough on the open road and you are forced to keep to the speed limits with the number of speed cameras around. You are forced to drive at 20 mph, 30 mph and 40 mph is built up areas and it is safer. Is speeding the problem or driver attitude? I have often believed that speed is not the real problem on WA roads. Rather, it is one of attitude.

Other reflections – people eat and drink all the time and consume a lot of it. The meals in pubs are huge. I had a pint last night at the Alexandra Hotel and found it difficult to get through it with the meal. The ROLOs are better men (and Lou Lou) than me because they can polish off many pints in one sitting.

Travelled from Fort William (via Oban) to Avonbridge arriving at 4.30pm. 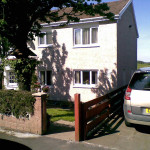 Again, thank goodness for the sat nav as Sandra could not remember how to get to Avonbridge from Falkirk (she lived there – well – 30 odd years ago). Did some shopping on the way.

Stopped at Stirling Castle and bought a tee shirt for Dylan from the shop. 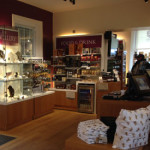 Also, a few of the ladies are getting cashmere scarves. I will not say who as that will spoil the surprise. Brett and Andrew – got yours and it is not what you are thinking.

Brian Martin is due to go back to Azerbaijan next Tuesday morning and I hope to spend some time with him before then. Hopefully, I will also get over my feelings towards sightseeing and hotel rooms. I should be ready to go again from Wednesday next week.