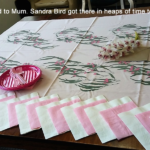 Betty had a morning tea in the lounge of the Sherwin wing, Adventist Residential Care. Visitors were many and all had an enjoyable time together. Sandra Bird was terrific in organising the food and drinks. Cher 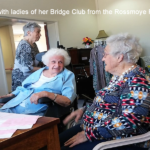 ene Lavender brought a cake and Joan Frost a plate of sandwiches. That complemented the sandwiches made by Ken and Sandra. Coffee and Tea was provided with milk and sugar. Cherene and Jan Fernandez helped with making sure that everyone had access to both food and drinks. It was terrific catching up with David and Betty Fleming and Joan and Geoff Frost. Roxy D’Rozario also attended with Ron and Jan Fernandez. It was nice to catch up with Joan Croft (nee Timmins). The ladies from Betty’s Bridge Club (Jan Trench, Mavis Grace, Joan Godley and Barbara Carter) at the Rossmoyne Retirement Village also attended. Ken spent some time talking to Joan Croft and Joan Frost. Ken told Joan Frost the story of Trevor and Beryl Fleming persuading Rex Bird and family to disembark at Fremantle Port [11 February 1963] [the original plan was to travel to live in Melbourne] and start a life in Perth. It was a decision met with some resistance from Mum who was not very pleased with the sudden turn of events. Betty was particularly good that day with her use of adjectives (Link – http://angloindiandu.com.au/?page_id=77). Ken recalls his Dad either displaying selective hearing or simply too frightened to say anything. Ken thought his Dad made the right decision. 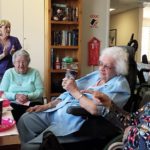 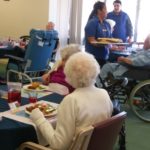 Staff at Adventist Residential Care arranged for Betty to have a cake and wishes from the residents at lunch. Betty has her own place at a table she shares with other residents. Pity Betty could not t

ake advantage of the delicious lunch that residents were tucking into.